Wow! I had such an amazing day on Friday 13th July at the ‘Technology in A Level’ course courtesy of the Advanced Mathematics Support Programme and hosted by Val Pritchard.  The venue at The Bayfordbury Observatory was an inspiring setting on a lovely sunny day.  Val started us off with some Excel techniques and despite years of practice on it, I was thrilled to learn

After a coffee break, Gerrard Dummett provided a very useful introduction to the latest Casio calculators; Classwiz and CG50.  It was good to practice the Binomial features on both calculators especially the tricky Hypothesis testing in the ‘tails’ – I will need to carefully go over that one.  In the meantime, I will continue to check multiple values.   Particularly pleased to learn how to use the USB cable to download a .csv file and follow it up later to produce a comparative box plot for the Edexcel data of gusts of wind at Heathrow in 2015 and 1987, guess which is which? 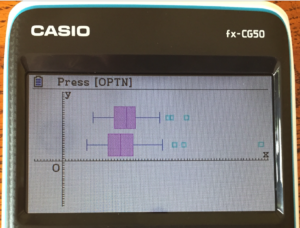 (Note of caution to self, whilst an extract of the Edexcel data was downloaded to my CG50 I will not be downloading to students CG50’s to avoid it accidentally being on there during their exam.)
After lunch Chris Saker provided a full afternoon of GeoGebra techniques.  This software seems to do everything and all so intuitive, after inputting a function eg f(x) just type f’ in the input cell below and it immediately works out the derivative function!  After some individual investigation we were soon producing some amazing resources of our own; particularly like my function with ‘little tangents’ to show the gradient and comparing it to the derivative graph 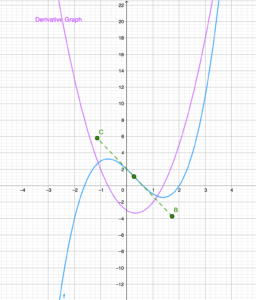 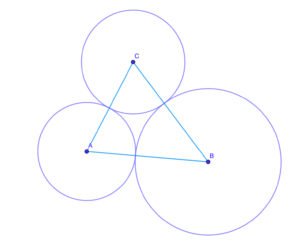 We were well looked after throughout the whole day even mints & fudge on the table, everything had been thought of.  Thank you so much to Val, Gerrard & Chris it was such a useful day and there is plenty to follow up and impressive my students and colleagues with.
And to make my day, I met up with a colleague from PGCE training days 10 years ago!  Great to see you again John.

Technology in A Level AMSP(previously FMSP)
This site uses cookies. Find out more about this site’s cookies. Got it