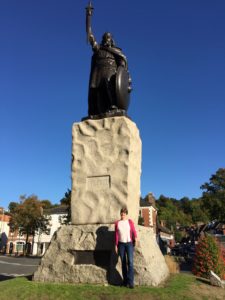 After thirty five years I returned to Winchester on a chilly but sunny morning to visit the school where I studied Maths & Further Maths at A level.  Having trained as a secondary Maths teacher in 2008, I was excited to return to where it began.  I arrived early and with some hesitation parked by the front door.  The entrance hall was as familiar as ever with its double sweeping staircase and the statue of St Swithun half way up (albeit a contemporary version; the original can still be seen in the hall too.)  I was soon met with a warm welcome from Mr Power, Head of Mathematics.  It was good to put the ‘real’ person to the tweets of @stswithunsmaths.
The Maths department is on the first floor so we passed the staffroom at the top of the stairs, still in the same place.  I was soon feeling very much at home.  As we headed down the Maths corridor, I spotted a display of slide rules;  I had mine with me.

After a brief introduction to some of the high tech routines of the department in the form of filing and assessment on the iPad, we headed to assembly for what, for me, was a new location.  The students still walk in, in silence.  A blissful start to the day.  Notices from the Headmistress, Ms Gandee, were followed by a hymn.  The Sixth Form gave a comprehensive and sensitive presentation on how to support others.
A first lesson with Mrs Bolger’s L5 (Yr 9) class provided us with a good warm up on ratio and an interesting shape question; a square inside a circle inside a square.  The topic for the day being ‘Reverse Percentages’ the class practised hard and the students were willing to let me join in and help them.  As ever, the new specification provides for some very ‘wordy’ questions. Mrs Bolger reminded us to ‘Read the question carefully, to decide what is being asked’.  I was able to share with some of the girls that I usually draw a diagram eg the water in the beakers question

After periods 1 & 2 (I’m sure the end of lesson bell hasn’t changed) Ms Martin, OGA, gave me an extensive tour of the school.  First she was able to share with me what she had found out about me from the archives; I was a ‘posture rep’!  I wonder what my responsibilities had been.  So many new buildings: new hall, Art, new Junior building.  The ‘old hall’ is now a library.  We stopped at Finlay to check out my old room.  I noted that the common room has moved.  Then it was off to Earlsdown via the redeveloped  garden with a new water feature.  I was in the first cohort to live in the new Earlsdown building and  it still felt familiar.  I met Rosie, who has ‘my old room’.  The view from the window across the fields has gone.  Picture here taken 1981/82 from my bedroom window in Earlsdown. 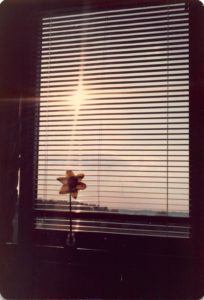 I was able to share a copy of the first group photo outside the house. 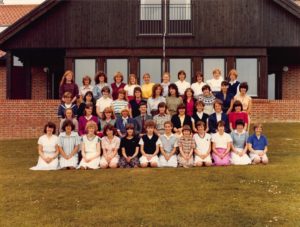 No time for break and on to my next lesson.  U4’s (Yr8) with Mrs Thompson.  I was just a little excited to discover it would be a ‘Hegarty Maths’ lesson (who planned the day?).  I met Mr Hegarty in June 2017 but until this week had never seen his resource in action.  So good to see the independent learning, immediate feedback and when necessary students seeking help. Then onto my final lesson of the morning with Mrs Greene, L6 (Yr 12).  No time to switch off as we were straight into a very challenging coordinate geometry question.  Great to see students suggesting ways to get started and working as a team.  I admit even my brain hurt with this question. 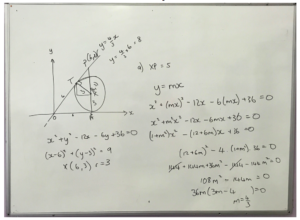 I was glad to get on to differentiation!!  It was interesting to discover later that  Mrs Greene & I sat our GCSE(O level) in the same year and I was able to give her a copy of the actual paper. 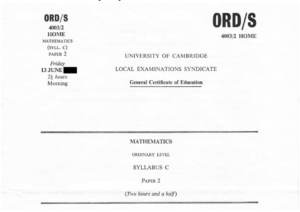 After a taxing A level lesson, I was delighted to be taken to lunch by Mr Debont and Mr Gates.  The dining room is now next to Earlsdown and has a lovely view across the countryside.
The final lesson of the day was with L4’s (Yr7) with Mr Gates.  I was thrilled to see the iPads in action and how seamlessly they got on with them.  An interactive pen not working?  ‘no problem’ plug it in for a few seconds on the iPad for a super charge – another tip learned.  It certainly felt antiquated to even consider getting out pen and paper.  As a final coincidence of the day, Mr Gates introduced the topic of coordinates and as if we had planned it, I was able to AirDrop a favourite resource of my own creation onto his iPad.  I was chuffed to see the students enjoying the task and drawing my dog and cat. 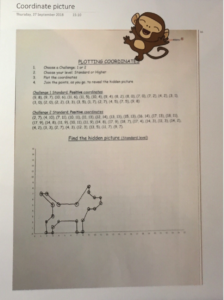 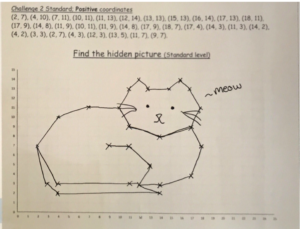 A final round up with Mr Power and it was time to head home. 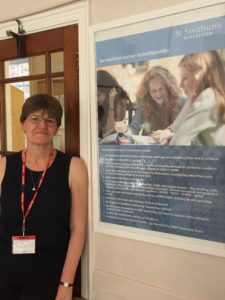 Thank you to the whole St Swithun’s Community especially to Mr Power and his Maths Department for making this happen and giving me an amazingly nostalgic day with the privilege to see his inspirational team in action.

If there are any errors, omissions or misrepresentations please email jforsythe@passion4maths.com

Visit to St Swithun’s School Mathematics Department.
This site uses cookies. Find out more about this site’s cookies. Got it